View source
watch 01:36
We're Getting Mutants in the MCU - The Loop
Do you like this video?
Play Sound

This article is a Stub. You can help DOS Wiki by expanding it.

"Quake" is a first-person shooter game originally released for DOS on July 22nd, 1996 by id Software and published by GT Interactive, and is the first game in the Quake series. 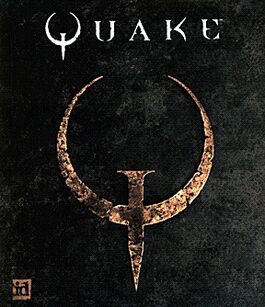 Quake takes place in an alternate universe where the government has been secretly experimenting with teleportation technology. They were able to develop a working prototype called a "slipgate", a portal used to access different dimensions. The player takes role of a protagonist known as Ranger, who is sent to stop an enemy code-named "Quake", an entity that has hijacked the slipgate technology in order to conquer our dimension. Ranger must traverse and fight his way through each of its four dimensions to obtain four magic runes located in each one. Collecting them is the key to accessing the home dimension of Shub-Niggurath (the true identity of "Quake"), and destroying her in order to end the invasion.

Quake is divided into four episodes, each taking place in a separate dimension with its own unique theme. These episodes are connected by a central hub and can be completed in any order, though first-time or inexperienced players are recommended to do them in their proper order. Before accessing an episode, there is a set of three pathways with Easy, Medium, and Hard skill levels. There is also a fourth difficulty, "Nightmare", which is hidden in the hub for players seeking an additional challenge.

Players must explore and navigate to the exit of each level, fighting monsters, collecting pickups, avoiding traps, and finding secret areas along the way. Usually, there are switches to activate or keys to collect in order to clear the way to the exit.

Multiple players can connect to a server and play together in various modes. They can either play through the main campaign together in Cooperative mode, or fight eachother in Deathmatch mode (game types for this mode can range from one-on-one battles, team battles, or just a free-for-all).

Community content is available under CC-BY-SA unless otherwise noted.
Advertisement